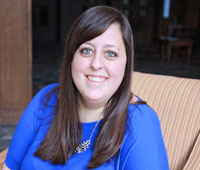 Alexis Renee Ward is an award-winning composer, arranger, conductor, singer, music educator, adjudicator, and accompanist. Her teaching and directing experience runs the gamut of ages and experience levels in both vocal and instrumental fields.

For over 15 years, Alexis has worked extensively in sacred music and the non-profit sector conducting amateur to professional level community choirs and orchestras, church choirs, children's choirs, handbells, praise bands, folk ensembles, theater troupes, and chamber groups. Her compositions have been performed in North America, Europe, and Africa and have been featured on such renowned stages as Carnegie Hall. Throughout her career, she has been honored to serve as a board member for several ensembles and non-profit organizations advocating for the work of living composers and supporting the arts in our communities. 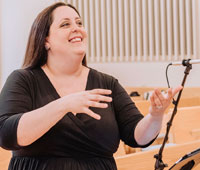 She received both her Bachelor of Music degree in Composition/Music Theory as well as her Master of Music degree in Choral Conducting at the University of Delaware and is currently completing the requirements for her Master's in Composition. In addition, Alexis has performed, studied, and worked with world-renowned composers and conductors including Jennifer Margaret Barker, Paul Head, David Lang, Eric Ewazen, Gary Graden, Anton Armstrong, James Jordan, Weston Noble, Dennis Shrock, Bruce Chamberlain, Charles Bruffy, Giselle Wyers, Rick Bjella, Simon Carrington, and Sandra Snow.

An avid performer, Alexis has performed with a wide variety of musical groups throughout the years, touring across North America, Asia, and Europe. She has most recently sung with the Mastersingers of Wilmington, CoroAllegro, the Cathedral Choir School of Delaware, and the Meridian Chorale of Atlanta.

She currently serves as Director of Music at Trinity Presbyterian Church, Artistic Director of the Chester River Chorale, and Creator/Co-Founder of the Sonus School of Music. She resides in North Delaware with her husband Thomas and daughters Hazel and Raegan. 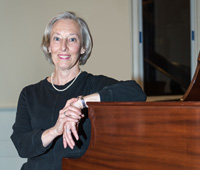 Accompanist for the Easton Choral Arts, graduated from West Chester State University with a Bachelor of Music Education in 1975. Becky received a Master of Education degree with a music concentration from Salisbury State University in 1981. From 1976 to 1996 she served as organist and choir director at Immanuel Lutheran Church, Preston. Rebecca is presently Director of Music at St. Luke's U.M.C. in Denton, having served in that position since 1996. She is a retired Caroline County Public School music teacher having taught at Greensboro Elementary School for 30 years. Rebecca Zinser has served as rehearsal accompanist for Easton Choral Arts since September 2009, and as Concert Accompanist on Piano and Organ.

Easton Choral Arts Society is supported in part by a grant from the Maryland State Arts Council,
the Talbot Arts and the Mid-Shore Community Foundation